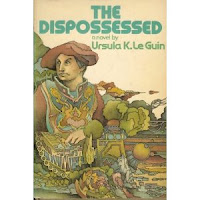 The Dispossessed is often considered Ursula K LeGuin’s most famous work, and it’s easy to see why. Although it doesn’t have the emotional weight of The Lathe of Heaven or the adventure and intrigue of The Left Hand of Darkness, it nevertheless manages to pose intriguing questions about the various types of societies that humans create and the ways in which the structure of those societies serve to both liberate and isolate the individual. Whether as an allegory for Cold-War rivalries or a subtle examination of how language reflects and influences the ideals of the society they describe, The Dispossessed is a wildly ambitious novel that manages to mix these heady concepts and discussions in with a story that draws us in and makes us care about the main characters and the fate of the two opposing worlds.

The Dispossessed Summary: The Dispossessed takes place on the only two inhabited worlds in the Tau Ceti star system, Urras and Annares. As the larger of the two planets and the original home of the Cetians, Urras is a large planet made up of competing nation-states: A-lo, a industrial capitalist republic, and Thu, a totalitarian socialist state. As the novel unfolds, the conflict between these two city states looms larger and larger. The economically underdeveloped  state of Benbili becomes the central front in a proxy war between the two main powers on Urras, echoing the conflicts in South East Asia that were fought by Capitalist and Communist interests during the last half of the 20th century.

But while the societies of Urras are forever in conflict, the residents of the planet Annares have almost completely removed themselves from any connection to their previous home. Inspired by the anarchist philosopher Laia Odo, the Annaresti are actually descendants of the first Odonian separatists to leave Urras  in the hopes of establishing a new utopian society upon Annares. We are first introduced to Annares culture 200 years after the founding of the settlement, during which time the Annaresti haven’t almost completely isolated themselves from what they consider to be the decadent, violent, and materialist culture of Urras. While the societies and conflicts on Urras sound surprisingly like the ones found on planet Earth, Annares culture is characterized by a lack of governmental structures and controls. Based off the teachings of Odo, Annaresti culture is rooted in the idea that personal property is an illusion and that governments and laws are what serve to corrupt society. The idea of ownership is so antithetical to the Annaresti that their language doesn’t even have a possessive form.

But while Annares culture may seem like a perfect Utopia, LeGuin reminds us that even in a society where rules and laws are abolished, subtle forms of societal control and enforced cultural conformity can still rear their head. Our main character, Shevek, is a famous physicist on Annares whose research into General Temporal Theory goes against the prevailing wisdom of the scientific community on his planet. In order to secure funding for his research, he makes the decision to travel to Urras to gain support and funding from  the scientific community there who seem eager to utilize his important work. But while the scientists of Urras seem to appreciate his work, he soon finds out that they have ulterior motives for wanting to help him complete his research.

The Dispossessed Review: While the story of a young scientist trying to find support for continuing his research into the way in which time works may not seems like the most exciting setup for a novel, Le Guin is able to make it seem important and engaging by framing it in the context of the inner conflicts and contradictions that all societies grapple with. Annares is not the perfect utopia filled with peace loving citizens, and Urras is not the evil materialist culture that the Annaresti think it is.  They are both flawed in some way and both contain aspects that can be appreciated and honored. While Shevek lives in a society that values communal sharing and glorification of the group rather than the individual, his obvious artistic and scientific gifts are not the cause for celebration and adoration they might be in a culture that values the artist and the individual. By presenting all of these options to us without trying to make a value judgement over which one is best, Le Guin allows us to see the strengths and flaws of each.